God the Dyslexic Dog write-up in the Wall Street Journal

Wannabe Comics Stars Include a Unicorn M.D. and Quasi-Mystical Engineer

By MICHELLE KUNG and ERICA ORDEN

At Comic-Con, 'Jimi Germ' fights diseases in a fictional modern Asia.
SAN DIEGO—Spandex-clad, screen-ready heroes aren't the only characters at Comic-Con International. Plenty of booths filling the convention floor are run by independent publishers and artists, often pushing concepts that might be too quirky, too mundane or too just plain out-there for Hollywood. If your tastes run to early 20th century, quasi-mystical electrical engineers or a bespectacled "Girl Genius," Comic-Con can accommodate you.

God has come to Earth disguised as a mangy mutt and is owned by a dyslexic boy named Nez, whose mother is, conveniently, a pet psychic. The title notwithstanding, God-Dog co-creator Brian Phillipson says that his series is "not a religious story." It "just happens to feature an old dog who's God." It also comes with a serious animation pedigree. Mr. Phillipson's co-creator on the quarterly comic turned graphic novel is his father Philip, a 20-year Disney Animation veteran who has worked on films including "The Lion King" and "The Black Cauldron."

The antithesis of most of the sexualized manga comic girls that crowd the Con, Heterodyne is smart, bespectacled and fights off her enemies with a wrench. Living in an "alternate Europe," Agatha is the star of Phil and Kaja Foglio's comic "Girl Genius." Mr. Foglio says Agatha is the long-lost heir of a long line of mad scientists. This makes allies and enemies want to kill her or control her, says Mr. Foglio, adding that "hilarity ensues." Mr. Foglio says he and his wife publish the comic three times a week online, where it moved in 2005 after four years as a print property. 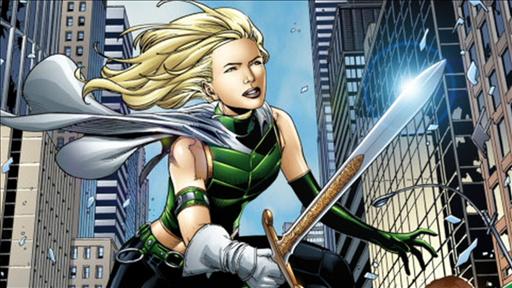 "Off Duty" takes you inside the world of high-tech comics: First, a preview of original Spider-Man and Batman cover up for sale at an online/live auction. Plus, comics get an iPad makeover Comixology. And Wendy Bounds gets a superhero makeover.

If you have a case of the rampant grumpies, your best shot at medical services is Doctor Lollipop. A pink, male unicorn medical doctor, Doctor Lollipop cures the residents of the Fancy Forest of maladies both whimsical (the aforementioned grumpies) and all-too-real (syphilis) with the help of a saw-wielding raccoon surgical intern. Doctor Lollipop's creator, the writer-illustrator Kelly Martin, says the idea for her comic-book character came in a passing fancy. She already had a tendency of naming inanimate objects around her, such as calling her vehicle "Dr. Car," so a male unicorn doctor was "simply the next natural step."

Making his first appearance at Comic-Con, Jimi "battles demons and strange diseases with his knowledge in traditional germ handling in a fictional modern Asia," according to publisher Gilamon Studio. The publisher is backed by an arm of the government of Malaysia called the Multimedia Super Corridor, which hopes to use properties such as Jimi Germ to build the nation's media industry.

Plenty of superhero lore revolves around errant gamma rays, X-rays, lightning bolts and other freaky forms of electromagnetism. The American Physics Society decided to take the same idea a step further with "Nikola Tesla and the Electric Fair," a one-off educational comic the society is promoting at its own Comic-Con booth. The comic doesn't imbue the eccentric Serbian-American engineer with super powers, but there is no shortage of drama. After a fight on page two with "bitter rival" Thomas Edison, Tesla storms out of his office. "You are a fool," he exclaims. "Your lack of vision will be your downfall. I will show you! I will go out on my own and build my AC system. And it will beat out your DC system and one day all the world will be powered by alternating current!"

This 17th-century Iraqi Sufi Master is the subject of a second book of comics, "The Wise Fool of Baghdad," by a team of brothers from India, making their first foray to Comic-Con. The brothers, real-estate developers, wanted to create comics based on stories they learned at their madrassa, said one of the brothers, Mohammed Arif Vakil.

Write to Michelle Kung at michelle.kung@wsj.com and Erica Orden at erica.orden@wsj.com
Posted by Bliss on Tap Publishing at 4:03 PM