I Play the Bad Guy #5 advance review by Steven Leitman 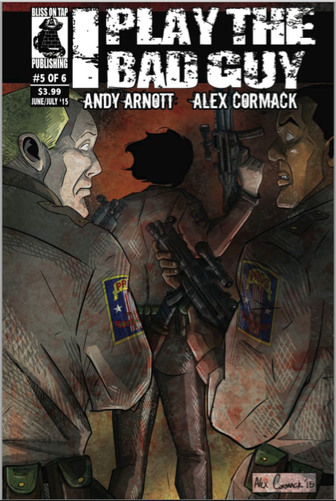 Well I have to say I really enjoyed the way this issue opened.  Seeing a teenage girl with some anger management issues towards mother well yeah it really does set the stage for some interesting characterization and to throw you off slightly as well.  Yes you have to read the issue to discover for yourself why but trust me when I say it’s a nice development and Andy has continued to surprise me with how good this story has been.

Frank and Eric’s banter is extremely entertaining.  Poor Eric has grown soft in his old age as he forgot what killing was like and while I suppose it’s like riding a bicycle he’s falling off and into the toilet.  Still these men go way back and their honesty with one another it’s really nice to see.   I do love Frank’s skunk trail on the side of his head and his gruff manner really does belie a softer side to the man that he thinks he hides well.  The little cat and mouse game they play to get some U.S. Government plates for the car was cute and using Eric to play the foreigner who can’t speak English well yeah that was kind of cliche and perfectly played.

Well as if their little adventure wasn’t fun enough as it was we see that Frank is also relying upon Lloyd to help him out getting inside as well.  The plates for the car is like insurance not really necessary but a nice touch to keep someone from looking too hard.  So we go inside with Lloyd and his young companion and again Andy’s ability for creating fun dialogue is fantastic!

The Major is a huge bitch and seriously I hope she dies before this is all over. Her previous interactions with the young lady whose powers with computers are extraordinary will come back to haunt her here.  Oh and Lloyd’s powers and age come into play beautifully in the process of locking the Major out with his granddaughter aged sidekick at the moment.   I’m gonna go out on a limb and say Andy has a daughter or his close with a niece because being able to nail a little girl’s personality like this, trying to be grown up and still a kid at the same time is too well done for someone who isn’t around a girl of that age.

The ending was well played my friend well played indeed.  Now that next issue ties this up and hopefully not too nicely I’d love to hear that there’s a possibility that we’ll get another one down the road, as in maybe 6-8 months from now, okay I’ll settle for a year, because these characters are too awesome to be left with a one and done.  There’s a lot to explore her and they’ve managed to really create some memorable and interesting characters that as a reader I want to know more about.

Alex, man, he’s come a long way in a short time he’s been working tail his tail off and honing his abilities and it shows.  When we get to the moment we see Lloyd jacking into the headphones for the password yeah that’s amazingly well done and part of that goes to Ashley for colouring what we see of the eyes.  Plus I’m sorry Lloyd and the girl steal the show and her facial expressions and his almost naivete go hand in hand together wonderfully.

Bliss on Tap has two incredibly strong books with this being one of them showing the world that great stories also come from small/independent press companies.  I keep asking people to read stories like this because they grumble about the “big two” and keep at it because this is one those extremely enjoyable and incredibly well done series that deserves your attention. 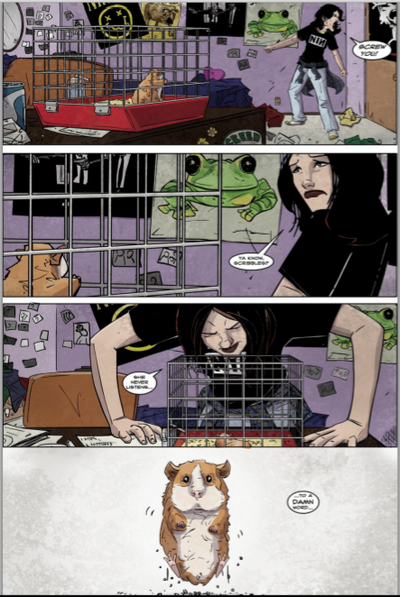 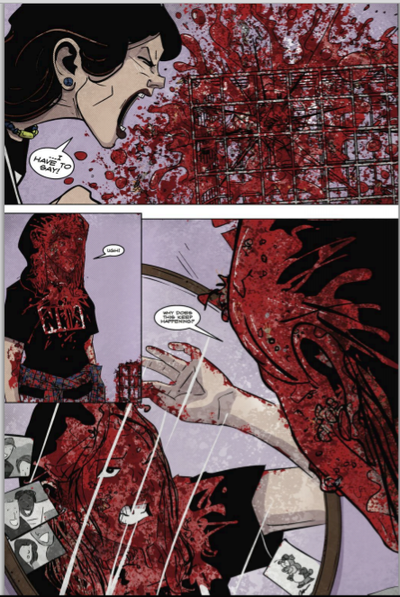 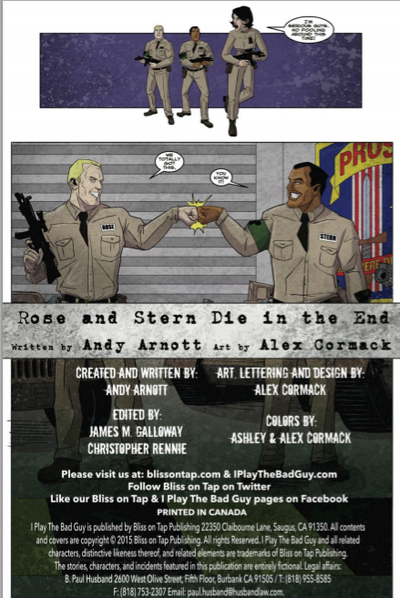 Posted by Bliss on Tap Publishing at 10:24 AM