Big Gems from the Small Press For June 2016 - ComicsHeatingUp.net 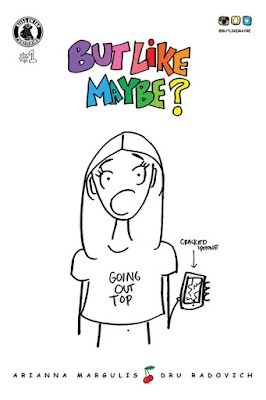 Dru Radovich, Arianna Margulis (A/CA) Arianna Margulis – Based on the smash-hit Instagram account, But Like Maybe? is a new comic book about life and stuff, examining the complicated world of selfies, brunch, hangovers, love, rejection, and over-analyzing everything. The first issue follows millennial heroine ‘BLM’ as she obsesses over her love interest ‘Hot Brad,’ while her teddy bear confidant attempts to intercept her crazy-girl antics. The voice of a generation… but like maybe?

Why I like It: I’m keeping a real close eye on this one…this has a lot of the elements that made Henchgirl great already an established Instagram fan-base, this book could be highly sought after and highly under ordered.

Brian Phillipson & Various (A/CA) Alex Cormack – Bloody love Hardcore Henry? Just wait until you read the official prequel Hardcore Akan, an origin story created by films director Ilya Naishuller, Brian Phillipson, and Will Stewart! Before wreaking havoc in the film Hardcore Henry, our ruthless villain, Akan, wasn’t always bad. Hardcore Akan uncovers what made him so potently evil; from his birth during the infamous Chernobyl disaster, to the discovery of his superpowers, to his ultimate rise as the head of Russia’s most sinister robotics company!

Why I Like it :Shout out to Minty Man-Cave Comics. He put me on to the Hardcore Henry and I really enjoyed it, and I’m shocked and happy they decided to release a prequel to the film which can easily be adapted into a film in the future ..could be a sleeper.
Posted by Bliss on Tap Publishing at 12:07 PM