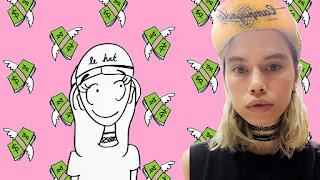 In a world where we communicate through Instagram memes that are stolen and re-posted by the same five or sex mega-accounts, it’s rare to find something fun and funny on Insta that’s actually original and one-of-a-kind.
But that’s exactly what @butlikemaybe is. The account is like a modern-day Cathy comic. helmed by LA’s Arianna Margulis. We caught up with Arianna about her inspiration for the hilarious character and what’s next for the account, which has become a bona fide brand with 100,000 followers and counting.

How’d you get into drawing comics? Did you like comics as a kid?
I have always been obsessed with cartoons. When I was little I had Mickey Mouse wallpaper, and slept with Ren and Stimpy stuffed animals. Daria was my teenage hero. I always drew for fun, but started drawing the @butlikemaybe doodles when inspiration struck after being cruelly dumped in Central Park by a lame ex-boyfriend.

How would you describe the @butlikemaybe character?
She’s devastatingly optimistic. Clueless, yet hopeful. She doesn’t understand why anyone would settle for less than a fairytale — and she’s going to keep searching for her unicorn. She’s a modern millennial, but not a brat. There is an honesty and a vulnerability about her that makes you relate. You can laugh at her, and then laugh about yourself. She got drunk and emailed her crush a poem, or to be truthful, I did.
I don’t still have the poem handy, but I do remember the last line — something something no matter the weather, Bo and Arianna together forever. Bo, if you’re out there I’m sorry.

@butlikemaybe feels like a modern-day Cathy comic in the best way possible. Is this intentional?
It’s funny because I get this comparison a lot. I think the one-panel Instagram cartoons definitely fit the vibe. @butlikemaybe is a sort of “bouncier” millennial Cathy, who tends to look on the brighter side after her grumbles.

Who are your character’s four dream besties, real or fictional?
Well number one is @butlikemaybe’s teddy bear confidant, Barry. He keeps her from texting the wrong thing, or from choosing the wrong crop top. He’s a five star Uber driver too. (Based off of my stuffed animal I’ve had since I was five years old).
If her dreams came true, she would wake up one day to a letter that somehow her birth certificate was mixed up at the hospital and she’s actually a Jenner-Hadid. Distantly related somehow to both families.
Can Dolly Parton be @butlikemaybe’s best friend too? I don’t know I’m just obsessed with her.

What is her spirit animal and why?
Spirit animal is definitely a golden retriever puppy. So cute, but then always kind of getting into trouble and running away from it hoping no one notices.

Which spice girl would she be? Which Sex & the City Character?
Baby spice 100. Who wouldn’t want that hair? And she always had the best platforms. Hmm Sex and the City — I’d have to say Samantha’s sexual appetite for sure. But can it be masked with Charlotte’s innocence and desire for a fancy wedding? Please just don’t call her Miranda ugh I know everyones thinking it. LOL

What’s your ultimate dream goal for @butlikemaybe?
Oh man, the ultimate is an animated series. I lose sleep over it getting so excited. A few months ago I got approached by a friend in LA, Dru Radovich, and we wrote a comic book together for @butlikemaybe. Never sleeping, we spent hours via FaceTime bicoastally bringing her out of Instagram. We are currently working to build her empire and hit the Emmys one day with her hologram.

How do you get inspiration for your comics? What’s the weirdest time/place an idea popped into your head?
I get inspired by new mistakes every day. Or by old memories. Once a guy told me he had to break up with me because I was throwing his meditation schedule off. I can’t make this stuff up. I think the weirdest one that popped into my head was when I was at the gym once, saw a cute guy, and noticed what time it was. I thought to myself, “I should come back tomorrow at this exact time.” Then I realized I was either nuts or a baby genius, and decided I needed to share this to the world as a cartoon.

Do you sell the “GOING OUT TOP” T-shirts? Where do we get one?!?!
So I JUST started making them — and they will be for sale SOON on the website. But for now, please check out www.butlikemaybe.com to get the comic book, or head to your local comic book store. And duh, follow @butlikemaybe :)

Posted by Bliss on Tap Publishing at 4:12 PM