Future Proof #9 review by Reading With a Flight Ring 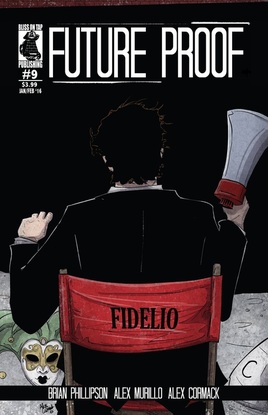 The one-way time-traveling adventure continues as everyone's favorite agents James and Simon visit a secret location to put the 'con' in the infamous moon landing conspiracy. Was the Apollo 11 moon landing real or just a Hollywood film production devised as a back-up plan to a possible failed mission?

I’m bad I know it’s been way too long since i’ve visited the boys and this series.  Cataloging my collection reminded me I have a few issues to review still so here we are.  The boys have a very drunk and passed out Edgar Allen Poe on a train in 1849 to open this story.  While the boys are keeping an eye on Poe doing what Poe loves to do most, drink apparently, it’s an opportunity for Alex to do a little more serious background characterisation.

Simon Magus has always been the more serious of the two and here we get a nice chance to see him in his life before he started this whole time traveling business.  His family saying goodbye and him in a mission that we don’t get to see the result of just that it’s something that causes him to have waking nightmares.  It’s great characterisation because it really just wets the appetite for more.  Plus we get that nice glimpse behind the curtain as it were and it’s this interjected into the silliness that James get him into that balances it all out.

Speaking of the silliness I love how they get to their final destination this issue.  It’s superbly thought out and executed.  Plus it gets the story suddenly much larger and the scope of Sing and it’s agents.

I am such a fan of Alex’s interiors.  I’ve watched him grow and take that talent he has and hone it, tighten it up and make it something great.  The flow of the story through the page layouts with the use of angles and perspective are fantastic.  The two page spread in those outfits is amazing to see finished.  The uniqueness of their faces, their expressions and the emotions the pictures bring really help this series shine.

This series is the best time traveling conspiracy theory story you’ll have the pleasure to read.  I mean it’s a tongue in cheek/serious look at those events that people think they know the truth about or that the theorise about the different things other than the public reality of them.  It’s just one of the great escapes with the perfect buddy pair to hit comics since Blue & Gold!
Posted by Bliss on Tap Publishing at 3:10 PM