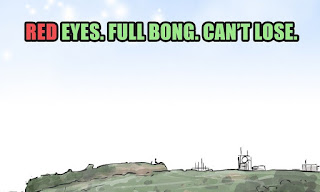 It’s 4/20 so you know what that means… We’re going to review a comic all about weed. Yeah, you read that right. Weed. And also “we”. See for once I’m not alone in this review. Given the subject matter I felt it needed a more, uh, informed opinion. Over to the one person I know who has a medical card – our owner Jenn. Her review will be along shortly, if she manages to actually focus long enough to write it that is.

We discovered Weed Magic during a stolen hour on the con floor at NYCC last year. I was drawn over by the massive poster in the booth with the tagline “Red Eyes. Full Bong. Can’t Lose”. After a chat with writer Brian Phillipson and a brief flick through #1 I was sold.
I apologise in advance (well, kinda) for the puns.

Hollywood, California. It’s 4/20 and two lovable stoners – Moe and his best friend Bunny – find themselves (and the whole city) completely dry.  When local vagabond My$tic gifts the boys a strange and exotic strain of cannabis (along with a cryptic warning), Moe and Bunny soon discover that this “magic” weed provides potent yet fleeting super-human powers of body and mind.  The love child of “Pineapple Express” and “The Greatest American Hero,” Weed Magic will delight the sober and stoned alike.  Red Eyes.  Full Bong.  Can’t Lose.

Put bluntly (hehe) this series is surreal and funny as hell. And I read it stone cold sober on a Monday afternoon!

Issue #1 introduces our heroes Bunny and Moe and gives us a glimpse into what the magic weed is capable of. Cue a bonkers montage, meeting some beautiful ladies, and the rescue of some wild animals. Moe works as a Law Clerk and once our heroes find their powers, they decide to use them for good. Sort of. By helping solve some of the backlog of cases at the office where Moe works. If you can lay hands on the extended Dealer’s Cut then do it, cos it adds a hell of a lot to the story.

The Smoke of Hell

#1 is fun, but #2 is where things get really fun. Accompanied by Emily and Grace our heroes find themselves transported back to biblical times in search of the lost seed that could grow more of the good stuff. And when I say Biblical Times I mean Sodom and Gomorrah, and selfies with Jesus. Ever wondered about that Burning Bush? Well wonder no more!

I’m going to admit something. I wasn’t expecting these comics to be THIS good. Like. All around really good. The art by Alex Cormack elevates what’s already a really fun story to another level. There are visual references littered throughout the series – a pastiche of the Last Supper, Bob Ross, King Kong (or should that be King Bong?), and The Evil Dead were among those I noticed. There’s also an actual plot. It’s a little hazy in places, but if you squint through the smoke you can see it. That and the humour were what kept me reading.


Now #3, subtitled Appetite For Munchies, is where things start to get really interesting. See it’s not just all stoner humour and fart jokes. Although there are fart jokes. The last few pages of this issue set up a menacing bad guy lurking in the shadows who wants the magic for himself.

I’m genuinely looking forward to #4 to find out how things unfold after that cliffhanger. For the first time ever I say roll on 4/20!
If you wanna check out Weed Magic for yourself then issues 1-3 are already available.  All issues are priced at… you guessed it. $4.20! You can buy from Bliss on Tap publishing. Issue 4 was originally due out on Wednesday (the closest NCBD to 4/20 but alas, due to the Covid-19 pandemic things have been put on hold. We will bring you a review of that as soon as we get it.

Posted by Bliss on Tap Publishing at 11:29 AM